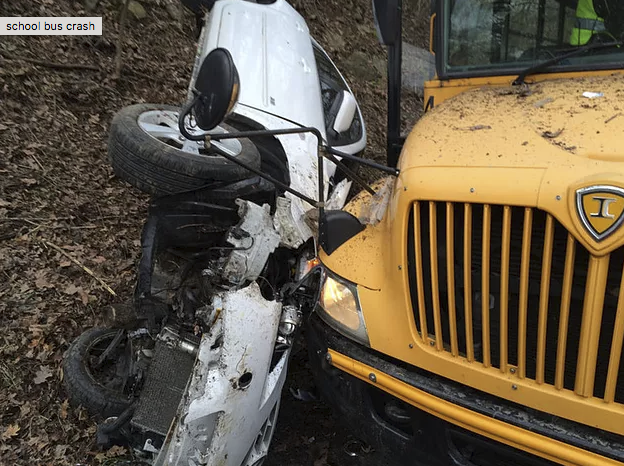 The 17-year-old car driver -- police are not identifying him because of his age -- will be cited with careless driving, a speed offense involving curves, overtaking a vehicle on the left and failing to drive on the right side of the road, Parkansky said.

The driver, a Forks Township resident who was heading west to Easton Area High School in a white Mazda 3 with a 17-year-old passenger, had some sort of encounter with another motorist on Wood Avenue before the 7:01 a.m. crash, Parkansky said.

The 17-year-old was passing that car, Parkansky said, when he saw the Easton Area School District bus driven by Nicole Coley, who has been with the district for six years and had just dropped off students at the Palmer Township high school.

The teenager pulled back into the his lane on the two-lane street that connects 13th Street in Easton to the area near 25th Street in Palmer, Parkansky said. But the boy over-corrected and crossed into the opposing lane and went up an embankment, which caused the car to go airborne, Parkansky said.

It struck the bus high on the passenger side — there was apparent damage on the roof — and came down the side of the bus, coming to a rest on the driver's side facing east, the same direction as the bus. Long skid marks go from the westbound lane across the eastbound lane.

One of the teens was taken for observation to St. Luke's Hospital in Bethlehem Township, Pennsylvania, authorities said earlier Friday.

The other teen and Coley did not require hospitalization.

Coley said she was "fine, just shaken up."

The car "began weaving ... it came across and went airborne," Coley said. "It was scary."