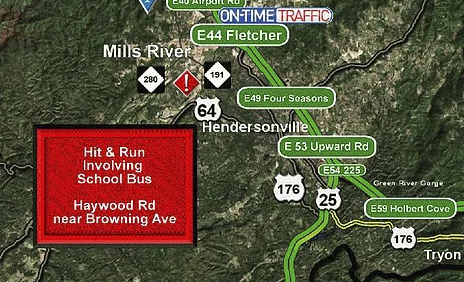 HENDERSON COUNTY, N.C. -- The Hendersonville Police Department has made charges in an early morning wreck involving a stopped school bus just before 7:44 this morning.

Jonah Wesley VanDoren, 17, of Hendersonville is charged with Felony Hit and Run resulting in injury and Felony Passing a Stopped School Bus striking a person (GS 20-166A1 and GS 20-217G). Mr. VanDoren was turning right from Browning Avenue onto Haywood Road as the school bus was stopped, loading children. Mr. VanDoren passed the school bus and in doing so, struck a 12 year old Hendersonville Middle School student, knocking him to the ground.

Mr. VanDoren then left the scene going to West Henderson High School, where he turned himself into his principal. The injured student was taken to Pardee Hospital by his mother where he is currently being treated for minor injuries.

VanDoren is currently at the Henderson County Detention Center under a $6,000 secured bond. VanDoren also has condition of release where he is not to operate a motor vehicle until allowed by a District Court Judge. For additional information contact Sergeant Brandon McGaha at 828-697-3025.