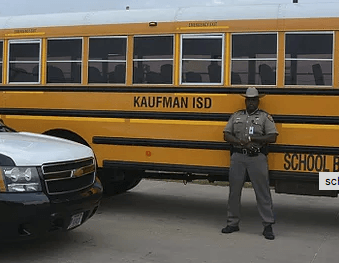 KAUFMAN COUNTY, Texas — Texas Department of Public Safety (DPS) troopers rode in and followed school buses throughout Kaufman County and across the state of Texas this week for National School Bus Safety Week to remind drivers it is illegal to pass any school bus that is stopped and operating a visual sign — either flashing red lights or a stop sign.

“DPS urges drivers to make the safety of our children a priority whenever they travel near school buses, and DPS will not tolerate those who break the law and put our children at risk, ” said DPS Director Steven McCraw. “Remember, children are particularly vulnerable when entering or exiting a school bus.”

During National School Bus Safety Week, troopers in many areas will be riding on or following school buses to catch motorists who disregard the law. Troopers will also be patrolling areas where school buses pick up and drop off students, watching for motorists violating the school bus law. Drivers who violate the law could face fines as much as $1,250.

In 2014 and year-to-date in 2015, Texas Highway Patrol troopers have issued 852 tickets for passing a stopped school bus. According to the Texas Education Agency, more than 42,000 school buses transport approximately 1.5 million Texas children every school day.

According to Texas statute, a driver – traveling in either direction – must stop when approaching a school bus that is stopped and operating a visual signal. The driver may not proceed until one of the following occurs: the school bus resumes motion; the operator is signaled by the bus driver to proceed; or the visual signal is no longer activated.

If a road is divided only by a left-turning lane, drivers on both sides of the roadway must stop for school buses with alternating red flashing lights activated. However, if the lanes are separated by an intervening space or physical barrier, only motorists going in the same direction as the bus are required to stop.

(As a reminder, school buses, by law, must stop at all railroad crossings.)

• When driving in school zones, watch out for student pedestrians.

• Slow down and watch for children congregating near bus stops.

• Look for children who might dart into the street without looking for traffic.

• Know and obey the laws concerning traffic and school buses in Texas.