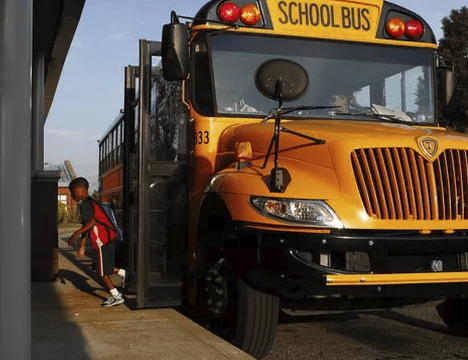 One minute, a 6-year-old is waiting for the school bus. The next, she's being rushed to the hospital in an ambulance.

Police say the Walker County first grader was hit by a car, crossing the street to the bus.

From her front porch, Andrea Kennebrew saw the whole thing.

"Shelby comes out of that driveway, not even two feet, two steps and bam,: said Kennebrew.

Georgia State Patrol says once the bus started to pull up, the 6-year-old, who family members call Shelby, stepped out into the road and was hit.

"As the bus was still moving forward with his ambers on, the vehicle traveling north continued by the bus," said Andew Gideon with Georgia State Patrol.

The driver, Audrey Buxmann from Ringgold, is not facing any charges because police say those amber lights signal cars to slow down, not stop

"As he was going by the bus, the child entered the roadway and was struck with the right front of the vehicle," said Gideon.

"She's got a busted spleen, she's got a broken pelvic bone, her leg is shattered, her brain's bleeding and her neck was almost broke," said Johnson.

GSP says surveillance from the bus matches the bus driver's account of what happened.

"He's actually a witness to what occured. He never had come to a stop, never involved in the accident or incident itself because as the vehicle was approaching, the child stepped out in the middle of the road," said Gideon.

Shelby went into surgery at 1 o'clock Friday afternoon to fix her broken femur.

She'll remain in ICU and hopefully be moved out soon.