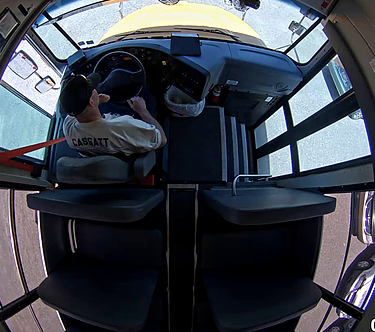 FORT MILL, S.C. — Thousands of children ride a bus to school each morning. Drivers who pass the buses when the stop arm is out is putting the children at risk.

McCloud said he’s seen in twice in one day during a route. Marc Vigeant supervises all the buses in Fort Mill and remembers the close calls.

“If it wasn't for a parent jumping out in front of a car while kids were crossing, we could have had a serious situation there,” he said. The school district spent $25,000 for exterior cameras aimed to the front and the back of the bus. The cameras are activated when the stop sign arm is out. One camera will capture the illegal pass and the second camera captures the license tag. Fort Mill police said it’s critical, because just getting the tag isn’t enough since anyone could be driving. The image also shows part of the stop arm so you can tell that it is extended.

The Fort Mill school district has 75 buses and only five cameras. When they get complaints from a bus driver on a specific route, they can take the camera off one bus and place it on another. Parents said they were not aware of the cameras, but were supportive. They told Channel 9 they were disturbed the cameras were needed. A one-day count in North Carolina in 2014 found 3,153 incidents where people violated the stop-arm law. In South Carolina, there were 429 reports. For now, Fort Mill schools are not handing over the videos to police yet. School officials will push for prosecution once they establish how a partnership with law enforcement will work. Bus drivers, who begin their day in the darkness, say one distracted or impatient person is all it takes. The penalty for a stop-arm violation is a $1,000 fine and six points on a license.

Channel 9 checked with Charlotte-Mecklenburg Schools and found only two buses in its fleet were fitted with the camera.